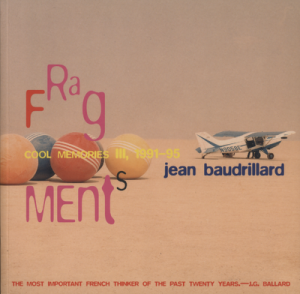 Reading Rabbit,
I fantasized about the clinical beauty
of the ‘percutaneous transluminal coronary angioplasty’.
A month later, a life-size coronary.
You have to be careful what you read. (p. 90)

Modern activities have the same subtle function as scavengers in the desert: by devouring dead time, they leave pure time at our disposal. By putting an end to free time, they deliver us from the anguish of full time.  (p. 14)

Today minimal energy is expended in work, while we deploy our maximum effort in leisure. The idea of reducing working hours is, then, to allow people to expend their energy in their free time. (p. 74)

Every effort to make me save time by using a computer is criminal. Making me save time – I who do not know what to do with it (this is perhaps what I am useful for: saving the species of the idle, which is under threat of extinction). (p. 83)

When one looks at the emptiness of current art, the only question is how such a machine can continue to function in the absence of any new energy, in an atmosphere of critical disillusionment and commercial frenzy, and with all the players totally indifferent? If it can continue, how long will this illusionism last? A hundred years, two hundred? (p. 27)

The paradox of abstraction, and hence of the avant-garde of modern art, is that, in believing it is ‘liberating’ the object from the constraints of figuration to return it to the pure play of form, it has tied it to the idea of a hidden structure, of a more rigorous, more radical objectivity than that of resemblance. (p.115)

The cinema today: end or impossibility of ending? Most current films, through the bloody drift of their content, the weakness of their plots and their technological trumpery – useless high-tech – reveal an extraordinary contempt on the part of film-makers for the tools of their own trade, for their own profession: a supreme contempt for the image itself, which is prostituted to any special effect whatsoever; and, consequently, contempt for the viewer, who is called upon to figure as impotent voyeur of this prostitution of images, of this promiscuity of all forms beneath the alibi of violence. (…) The sabotaging of the image by the image professionals is akin to the sabotaging of the political by the politicians themselves. (p. 117)

Working on the event as it happens, working in the heat of the event, as with the Gulf War, yet not in real time and not with the benefit of hindsight, but with the distance of anticipation. Journalism of the third kind, the very opposite of news reporting. (p. 33)

The Left collapsed the way it did (…) because (…) it was not capable of coming to terms with the indifference and inertia of the social body. In a sense, it is almost to its credit to have fallen, not for having renounced its ideals, but for not having managed to rid itself of them definitively. (p. 63)

Socialism thought it had contracted a legitimate union with History. Without ever having courted it, it thought it was humanly possible to take history for its own. Hardly had it got into bed with it than it became the eternal cuckold. It must be said that history had whored around in lots of ways long before it met socialism, and all that remained was to enjoy the remnants of a corrupt history or the phantom of a vanished one. The last we heard, it had been kidnapped at this century’s end, and no one is willing pay the ransom. (p. 85)

Stigmatizing the millions of Italians as ‘consenting victims’ of Berlusconi, denouncing the stupidity of the masses and wrapping oneself in the flag of the divine Left and its democratic arrogance – this is the pose of the enlightened intellectual, who is prepared to leave his country as a punishment (though he does not do so).
All this comes from a short-sighted, conventional analysis of political Reason. The ‘blind’ masses, for their part, have a more subtle – perhaps transpolitical(?) – vision, to the effect that the locus of power is empty, corrupt and hopeless and that, logically, one has to fill it with a man who has the same profile – an empty, comical, histrionic, phoney individual who embodies the situation ideally: Berlusconi.